A Brief History of Craniosacral Therapy 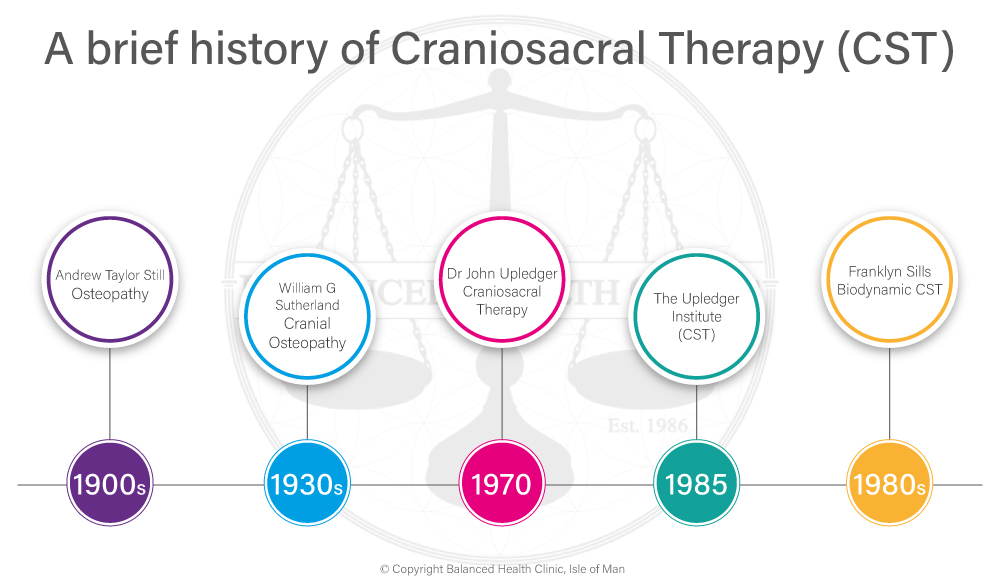 While the existence of the cardiovascular and respiratory rhythms is not disputed today, a debate concerning their reality raged medical communities around the globe for centuries.

Craniosacral Therapy (CST) started off as Cranial Osteopathy (which itself is a branch of Classical Osteopathy), and then diverged from the Osteopathic mainstream, whilst retaining many elements of the philosophy of Osteopathy.

Osteopathy was devised by Andrew Taylor Still (1828-1917). A surgeon-doctor during the American Civil War. Still became disillusioned by the heroic medicine of the time (consisting mainly of opium and mercury salts) after he lost two of his children to meningitis.

Osteopathy has a philosophical foundation in the New Thought movement, followed by people such as Ralph Waldo Trine. In turn, this owes many of its principles to the writings of Emmanuel Swedenborg, the 18th century Swedish scientist-engineer-philosopher and Christian mystic. Andrew Taylor Still Still was also strongly influenced by his childhood contact with the Shawnee American Indians that he met and played with on his parent’s farm. He had a deep spiritual belief that informed all of his actions, and both traditional Osteopathy and CST have continued that, having a fundamentally Vitalist view of the body.

​In the early 1900s, as an osteopathic student in Kirksville, Missouri, Dr William G Sutherland a student of Andrew Taylor Still, was struck by an idea. He saw that the bones of the skull were designed to provide for movement in relationship to each other. For more than 20 years he pondered the prospect of moveable bones in the adult skull. He performed experiments on himself developing a system of treatment that became known as Cranial Osteopathy.

Further research followed over the years, with a major discovery in 1970 by a surgeon, Dr. Upledger, who was quick to understand how a hydraulic system might function inside a membranous sac encased within the skull and the canal of the spinal column.

In 1975 Dr Upledger joined the Michigan State University Osteopathic College as a clinician researcher and professor in the Department of Biomechanics and he led a mulit-disciplinary research team that first established the scientific basis for the existence of the craniosacral system and function. The team was able to explain in scientific and practical terms the function of the craniosacral system. It showed how this system could be used to evaluate and treat malfunctions involving the brain and spinal cord as well as a myriad of other health problems. Dr John Upledger coined the term Craniosacral Therapy.

In the two decades since his original research. Dr Upledger has written three text books: CranioSacral Therapy, CranioSacral Therapy II Beyond the Dura and SomatoEmotional Release and Beyond which explain the functioning of the craniosacral system in detail. In 1985 he established.

The Upledger Institute, a clinical and educational resource centre in Florida. Since then thousands of healthcare professionals have studied the therapeutic value of the craniosacral system.

Since Dr John Upledger first coined the term, craniosacral therapy (CST) has broadened and diversified over recent decades into a number of distinct styles that all share a common heritage, but differ in how the work is applied in clinical practice. Now CST is truly on its way to becoming a new health technology and has effectively demonstrated its usefulness to the human race as a tool for good health.

There are now several different approaches to the philosophy of CST, for example, Upledger CST, Franklyn Sills Biodynamic CST, which has further developed into Process CST, Hugh Milne’s Visionary Craniosacral work, and many others have developed schools of philosophy and published books on the subject. There are many independent schools, which align with one approach or another or claim synthesis across the spectrum of teachings. However, they are all based on a common approach: listening to the client’s body and using very subtle techniques to effect profound change.