The Five Elements in Relation to C19 for Therapists 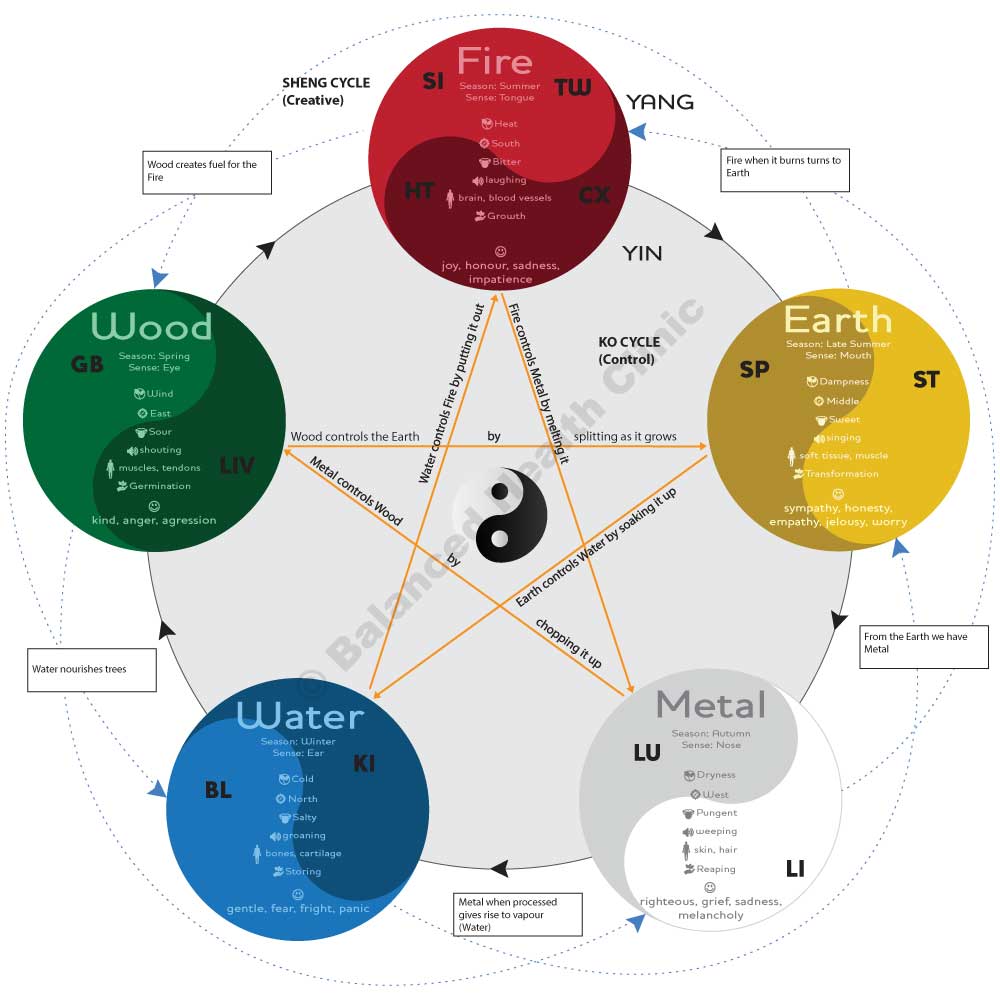 For us therapists who work within the TCM sphere, the Chinese 5 elements are the foundation of the work that we do.  When there is an out of balance element, energy needs to be generated around all elements, to feed and nurture that element.

The opposite of Fire is Water, and following a collective meditation by the Australians who called upon the controlling Ko cycle to put out the fires, there were floods. If the Sheng cycle is out of balance, the Ko cycle could also be out of balance.  So we must be very careful in how we apply the opposing controlling cycle.

At this time of writing (March/Apr 2020), here in the Northern Hemisphere in the cold yet sunny British Isles, we are currently in Spring – the Wood element, which is often associated with frustration, anger, tendons, and eyes.  Weather-wise, the northern hemisphere has had a very wet, cold and windy time of it these past few months and all these weather patterns sit in the Water and Wood Elements.

Between November 2019 and February 2020, severe winter flooding occurred across the United Kingdom. … Further isolated flooding incidents were reported in December and January, before the second main wave of flooding, caused by Storms Ciara and Dennis, occurred in February 2020.

We have come out of our Winter/Water – all about fears, anxieties, ears, bones, hoarding and storing and are moving through Spring/Wood.  We have also gone into isolation along with those in the southern hemisphere.

Wood is all about the Liver and Gallbladder, the Solar Plexus area, so we can expect all those fears and anxieties of Water to now turn into frustration and anger, during our period of self-isolation.  Physically there could be tendon and eye issues commonly associated with this element. The opposite of frustration and anger is kindness and compassion, so to heal and balance Wood, we need to focus on acts and behaviours of kindness.

Wood is a time for germination.  Play this right and we in the northern hemisphere could help sow the seeds of a new path for the world to follow and this will grow and develop through the Summer/Fire cycle.

The importance of the Earth Element

The 5th element of Earth has also been in play.  Earth as a season, sits in late summer, and it also sits in the last two weeks of EVERY season. Earth is contained in all the elements and is all about transformation.

Earth nurtures Metal.  So whilst the population in the southern hemisphere self-isolated during the Earth season, Earth began to heal and balance.  Through that balance, all the elements can balance, because Earth is contained in every element.

So it is interesting that C19 has affected the southern hemisphere first, during their summer cycle.  They have come out of the Summer/Fire element and with it, the extreme ways that the Fire was playing out, gone through the Late Summer/Earth element and now entered their Autumn/Metal phase.  In Metal, the southern hemisphere can now expect to experience grief, sadness, and melancholy in their period of self-isolation.

Metal is all about Lung and Large Intestine, and Lung is one of the systems affected by the C19 virus.

Metal/Autumn creates Water/Winter and controls Wood/Spring.  Whilst Metal in the southern hemisphere is being balanced and healed, that Metal is also controlling Wood in the northern hemisphere.  Wood/Spring creates Fire/Summer and controls Earth/Late Summer at the same time. The Metal will go on to create Water, which in turn creates Wood, and the cycle continues and the hemispheres will move through their phases of healing.

An interesting symptom of C19 is the feeling of pain or discomfort in the Solar Plexus area.  The Solar Plexus is about empowerment and the counterpart archetype of that is to be a servant, feeling powerless.  Solar Plexus issues can give rise to being hypersensitive to rejection, being critical, judgmental, insensitive boorishness, tyrant like in a massively “What’s good for one of us, is good for all of us!” pattern.

So as a therapist, it is exceptionally important now more than ever, not to fall into that servant role, not to offer free or discounted services, keep your empowerment and carry on your fees as normal.  If that feels like a challenge, go within, discover where that uncomfortability sits and heal that core wound. There is a difference between offering services for free in order to generally empower others as well as yourself, and offering services for free because you’re starting to drop into that unbalanced archetype of being the servant, which will then put you down into Base Chakra fear of lack. Stand in your power as much as you can.

As one of my colleagues so eloquently put “it’s more important than ever to hold the value of the work we do”.

Our role as a therapist now is extremely important. We don’t need to worry about healing Mother Earth directly, because just like every one of us, she can heal herself.  She’s more powerful than we give her credit for, she is bigger than you and I. Instead, we need to balance all the elements of ourselves and show our clients how to do the same, and this will also be reflected in Mother Earth.  We reflect the outside environment and vice-versa.

Whilst ALL Elements need to be balanced with our clients, maybe we should also focus attention to the Element that we are currently in at the time of treating the client and also focus on the Earth element, as Earth is contained within every element.

Comparisons to the Celtic Medicine Wheel

With the world in a state of lock-down, borders closed, commercial flights and shipping have reduced significantly.  Air pollution has fallen, the quality of the air is improving and water quality, noticeably in the canals of Venice, appear to be improving.  The elements of Air and Water are healing. Earth is healing.

Mother Earth has entered her period of healing in the South, the base grounding chakra if you will, and she is sending energy to Wood in the North, the solar plexus, to give energy to plant the new seeds.  How we as humans act on that, is our choice. We can choose to act from a place of fear, continuing to serve fear, or we can choose to act from a place of empowerment, compassion, and love. We must be mindful here in the northern hemisphere, that whichever place we as a collective act out of, that will be the energy that germinates the seed.

Now more than ever we must work together, break free of the fears that enslave us, raise our vibrations, live in gratitude and love.  We as therapists can guide our clients to that place.